Don’t handicap your players – deploy them to their positions of strength! 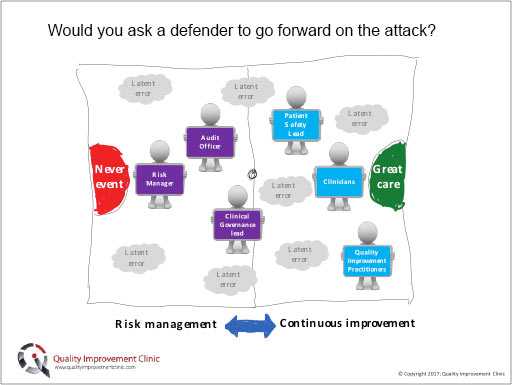 If you’ve ever played a team game, even at school, you’ll know that different skills are required depending on the position you play on the pitch, pool or court. You might have had a favourite, or maybe one that you dreaded. Either way, you won’t have been happy if the positions you prefer were taken and you had to play a position where you have few skills to offer! With your sense of joy dashed, you might even have hoped for an early substitution.

Of course we’d never tolerate this in a professional game. Can you imagine the reaction of fans, players, referees and managers if the speedy, nimble top striker was asked to cover in defence instead of trying for goals? And what about asking a steady and trusted defender to stop protecting their end from unwanted and unnecessary intrusions and instead, pop up front to have a go at scoring?

In healthcare we have several well recognised roles on the defensive side of play: They are our risk managers, audit officers and clinical governance leads. Their skills lie in assessing and managing risks, and ensuring the defences are good enough to avoid a breach that might lead to harm to patients, staff, the organisation and possibly the community. On the proactive side we have some well established roles too: Patient safety leads, clinicians, and more recently, quality improvement practitioners whose primary concern is to explore, learn and implement change that increases our chances of delivering great care. And as with the sport analogy – no one player can win the game, in healthcare it’s a team effort across the system that supports the team’s success.

So given the differences between these roles, and the effort we go to define them in job descriptions and person specs (see table below), why in healthcare have I seen the same people have their titles switched periodically over the past 2 decades to suit the mantra of the day? From risk manager in the 90’s to clinical governance officer in the 00’s (defender to midfield), patient safety officer in the 10’s (midfield to striker), and back to clinical governance officer (striker to midfield) before the decade is out. It’s at odds with what we know about matching skills to the task in hand. The effect is to waste precious people resources throughout the care system – only allowing true talents to emerge periodically when roles temporarily align with individual strengths.

It’s true that some people can make this transition but, in my experience, they are not in the majority. And in handicapping our players by poor substitution decisions, we deny them joy at work and leave them and their colleagues frustrated. Critically this denies everyone, including patients, access to balanced and well-rounded skills that ALL teams need if they are to give of their best.

Quality improvement: Habits of an improver[i]